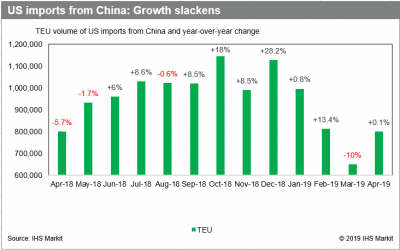 When it comes to our industry, knowing the current economic climate and how it will affect us personally is essential. Here is a great article along with commentary on how the current trade war between China and the United States may influence you and your customers directly.

As most of you know, the Trump administration recently raised tariffs on $200 billion in Chinese goods in mid-May and has threatened to impose tariffs on another $325 billion in Chinese exports to the United States, a step that could draw further retaliation from China.  US truck freight and intermodal volumes have been sliding for five straight months, making the possibility of economic contraction seem much more likely in the short term, despite healthy consumer sentiment and record low unemployment and long term benefits of fairer trading practices. The re-escalating trade war between the United States and China will damage growth, both directly and indirectly, according to Nariman Behravesh, chief economist at IHS Markit, the parent company of JOC. “Higher US tariffs and Chinese retaliation will directly hurt growth in the economies of the two antagonists. This, along with disruptions in supply chains, will drag down growth in the emerging world.”

Trump and Xi are scheduled to meet at the G-20 summit in Osaka, Japan, June 28 and 29 to resolve the “trade spat”, although most believe the two leaders will not come to an agreement because the tensions are not primarily about trade. For the US, the dispute is about protecting intellectual property, opening  and increasing market access, and creating a level playing field for US companies and China ‘s interest lies in aggressive technology acquisition, protecting domestic champions, and maintaining state-supported development. If the US-China dispute escalates, it could have a larger effect on world trade, particularly driving trade diversion and shifts in sourcing. “We see material and growing downside risk to the economic outlook,” said analyst Donald Broughton, founder of Broughton Capital and author of the Cass Freight Index report. “The weakness in spot market pricing for many transportation services, especially trucking … heightens our concerns about the economy and the risk of ongoing trade policy disputes.” The higher US tariffs could eliminate as much as 10 to 15 percent of trans-Pacific eastbound volume from China in the short term. “Successive waves of tariffs are a massive game changer” in reducing trade between the US and China, Ludovic Renou, president for container line CMA CGM America predicts.

Although global traffic affects trans-pacific cargo immediately, US highways and rail lines (YOU) will experience the trade war ripples as well.  It’s more difficult to draw a direct line between trade policy and softness in trucking or domestic intermodal rail, largely because multiple domestic factors influence those modal freight volumes. There are signs that domestic US freight demand can power through trade disruption, to an extent but some predict that the high inventories suppressing demand “suggests contract pricing is under increasing amounts of pressure and is at risk of going negative by the end of the year”. Follow the link to read the entire article https://www.joc.com/regulation-policy/trade-policy/united-states-trade-policy/tariff-war-casts-shadow-us-ocean-surface-freight_20190528.html (This article was commentary by the author.)

This article was commentary by the author.